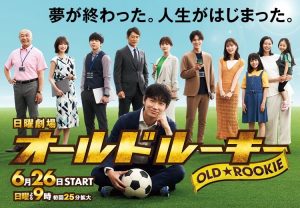 Ryotaro Shinmachi (Go Ayano) is a 37-year-old professional soccer player. He devoted his life to the sport and he was a member of the national soccer team. After an injury, his play has been in decline. This led to him playing for the J3 League. Now, he is forced to retire as a soccer player. All he knows is soccer, but, at the age of 37, he must find a regular job like other people and work like them. His daughters are extremely proud of him because he plays soccer, so he isn’t able to tell them about his retirement. Ryotaro Shinmachi then finds sports management company Victory. He decides to work there and work hard for the company, but, in his mind, he still has a hard time accepting his playing career is over. He faces a big problem at work.