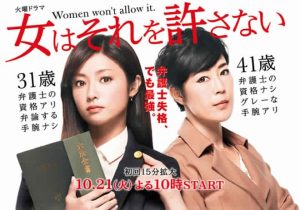 Urara Iwasaki (Kyoko Fukada) makes an error during her first trial as an attorney which hurts her client. Urara Iwasaki thinks law isn’t right for her and she quits her job. She now has a debt of 4 million yen and earns a living by doing part-time work.

Meanwhile, Rinka Ebisawa (Shinobu Terajima) is a competent lawyer, but its revealed she used excessive ways in her cases and is dismissed from her law firm and disbarred. She can’t work as a lawyer anymore.