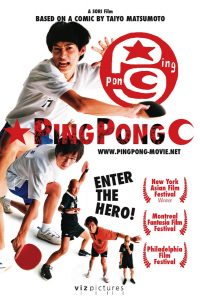 As children, the introverted Smile was being bullied by a gang of kids until the brash Peco comes by and chases all of them them away. Peco then takes Smile under his wings and teaches him how to play the game of ping pong. From there a life long best friend relationship comes into existence between these two polar opposite kids.

Fast forward a decade later, Smile and Peco are now about to compete in a high stakes regional ping pong tournament. While Peco has always wanted to be the best ping pong player in the world, he has never had the drive to fully devote himself to the game. Rather than finding him practicing in the high school gym you would more often than not find Peco hustling other kids out of money at the local ping pong parlor. This is in contrast with Smile, who has the god given talents to actually become the world’s best ping pong player, but is to humble to destroy his opponents. More often than not he allows his opponents to win points and even entire games out of sympathy for them.

Now these two best friends try to deal with their own inner turmoils, as they move further and further into the regional ping pong tournament. Peco has to overcome a knee injury while trying to rediscover the fun aspects of the game of Ping Pong. Meanwhile, Smile now seems to have gained the killer instinct by going through a rigorous training regiment instilled by his high school coach. As the tournament progresses it becomes more likely that these two best friends will face off against each in the final match.