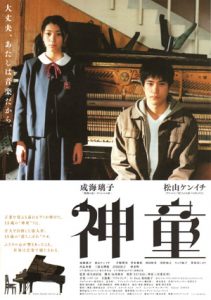 Uta Naruse (Riko Narumi) is a “unique” 13 year old child. She possessed the talent to read sheet music even before she could speak, but has now come to the point where she hates playing the piano. Her father was also a piano virtuoso, but mysteriously disappeared from her life at a young age.