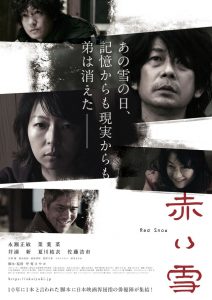 On a snowy day, a boy disappeared. The missing boy’s older brother Kazuki Shirakawa (Masatoshi Nagase) blamed himself for his brother’s disappearance. The event traumatized Kazuki Shirakawa. There was a woman who was a suspect in the disappearance of the young boy. Mysterious murder cases happened surrounding the woman, but nothing was proved.

30 years later. Shogo Kodachi (Arata Iura) is a reporter. He seeks the truth in the disappearance of the boy from 30 years earlier. He finds Sayuri Eto (Nahana). She is the daughter of the kidnapping suspect from 30 years ago.