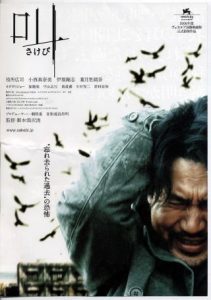 Tokyo detective Noboru Yoshioka investigates the death of a woman who has been found murdered. She has been drowned in a puddle but her lungs are puzzlingly filled with salt water. Yoshioka is baffled to find a button from one of his own coats near the scene and his fingerprints on the dead body. Next a respectable doctor drowns his wayward son in an identical manner and with evidence at the scene also implicating Yoshioka. Yoshioka is haunted by the ghost of a woman in a red dress who insists that she knows him, even though he is certain that he has never seen her before. Gradually she begins to show Yoshioka that he may have been responsible for her abandonment and death in a building during urban redevelopment.