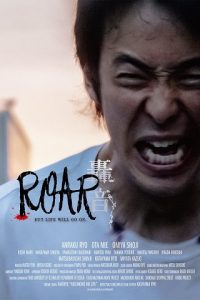 This impressive debut feature by Ryo Katayama sets two parallel stories in Fukui City on the west coast of Japan. In the wake of a horrendous crime committed by his older brother, Makoto (Ryo Anraku) runs away from home and follows around a mysterious, silent vagrant (played by Katayama) who gets hired to beat up men. At the same time, radio announcer Hiromi (Mie Ota) tries to ward off the increasingly aggressive attention of her boss, with whom she starts a half-hearted affair, while struggling to find genuine love and compassion. As the different kinds of violence in both Makoto and Hiromi’s lives escalate, Roar builds to a boiling point that finds the two strangers confronting the violence within themselves and their individual desire for liberation.