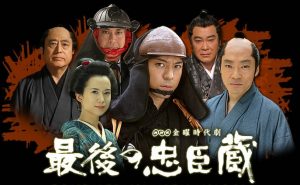 Synopsis
Chushingura is a famous story in Japan on 47 samurai in the Edo period who avenge their lord against Lord Kira, who was the cause of the master’s death. This drama based on Ikemiya Shoichiro’s book focuses on Terasaka Kichiemon, the only survivor of the 47 samurai. After raiding Kira’s residence and taking avenge, Terasaka receives an order from Oishi Kuranosuke, the leader of the group to escape from the site. The rest of the samurai is ordered to commit seppuku by the Shogunate and kill themselves. Living in disguise and receiving contempt from others, Terasaka struggles to follow Oishi’s order. He works to pass down the true intention of avenge to the next generation and at the same time looks after the families of the 46 members.