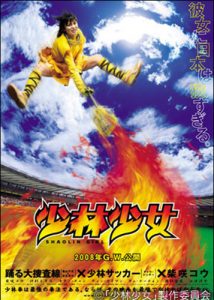 After harsh training in a Shaolin martial arts school, Lin returns home. She wishes to spread the art of Kung Fu, but her old master now works for a Chinese restaurant and her grandfather’s gym closes down. One day, she learns lacrosse from her friend, Ming-ming, and she tries to integrate her martial arts into it. Meanwhile, a villain reaches out to Lin to take away her powers.