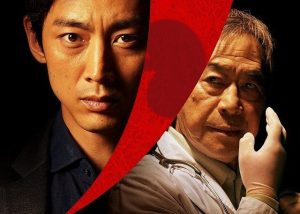 Kyota Numazaki (Kotaro Koizumi) is the director of a TV program production company. He discovers a female body in a forest in Fuji. The autopsy concludes that the female froze to death, but a kidney from the body was removed. Detective Shiroi (Kosuke Toyohara) doubts the conclusion of the autopsy report.

An injured man and woman are brought to the hospital. Director of the Hospital, Isamu Ota  (Shigemitsu Ogi), learns from the scars of the injured persons, that a kidney transplant was carried out between the man and woman. He also learns that the kidney was sold and bought. He reports his discovery to the police. Dr. Seiichiro Hino performed the kidney transplant and is asked to go to the police station. TV program director Kyota Numazaki decides to cover the story between the female body and the organ trade.