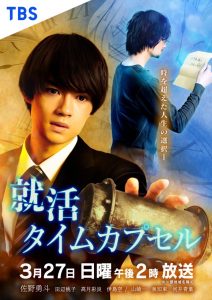 Asai Takuma is a final year student in university who has difficulty finding a job. As he sees his peers landing job offers, his inferiority complex and desperation spurs him to dig up a time capsule he buried with his childhood friends 10 years ago where he puts a note mentioning his wish for a job. However, this results in him receiving a letter from himself 10 years later where his shocking future is revealed and in order to avoid that from happening, he teams up with his future self to do something about this.