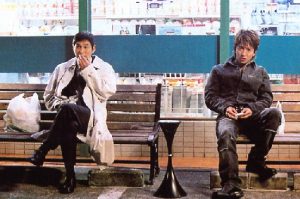 The down-and-out detective Kanzo Dojima (Sanma Akashiya) is thinking about hanging up his job. A mysterious man named Ryo Katase (Takuya Kimura). No one seems to know what’s going on in the heart of this lonely guy, what he believes in, what he really loves. Then these two men meet by chance one day. The story takes an unexpected turn of events concerning a murder case. Maybe the two of them should never have met. And then there’s Kanzo’s sister Yuko (Eri Fukatsu). What will the relationship between her and Ryo be like?