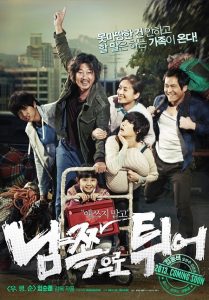 Choi Hae-Kab (Kim Yun-Seok) is a middle-aged father, who still stays true to his leftist ideology gleaned from his student activist days. He is married to his college sweetheart An Bong-Hee (Oh Yeon-Su), who also holds similar leftist ideals, and they have three children. Choi Hae-Kab doesn’t hold a regular 9 to 5 job and, instead, works as a director of film documentaries. His subject matter covers the dark side of South Korean society. Because of this, he is actively monitored by the Public Security Bureau, with two agents assigned to his movements.

Meanwhile, his children have learned to deal with their unusual upbringing. Their father refuses to pay the TV license tax, because they don’t own a TV. Their father doesn’t care if they attend school, because he doesn’t agree with the school’s curriculum. When his only son runs away from home, Choi Hae-Kab doesn’t panic and calmly tells his son over the phone that if he wants to talk to his mom he can talk to her at home and hangs up.

One day, Choi Hae-Kab’s old friend Man-Deok (Kim Sung-Kyun) appears at their home in Seoul. Choi Hae-Kab grew up with Man-Deok on Deul Island during their childhood days. Deul Island is a small island, with an even smaller population. Back then, the island was owned by the government, but, more recently, Congressman Kim Ha-Soo (Lee Do-Kyung) spearheaded the sale of the island to a corporation wanting to turn the island into a resort area. Man-Deuk has done everything he could to fight against the sale of the island. Now, he has come to Seoul as a last resort.

Soon, Choi Hae-Kab takes his family and goes south bound to Deul Island to save the place he once called home.