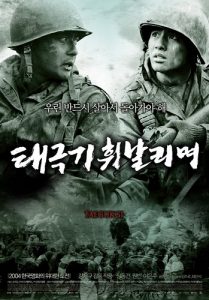 Jin-Tae (Jang Dong-Kun) and Jin-Seok (Won Bin) are brothers who are unwillingly drafted into the South Korean army following the outbreak of the Korean War in June 1950. Meanwhile, Jin-Tae’s fiance Young-Shin (Lee Eun-Ju) joins the communist party to get food for the rest of her family.

Jin-Tae, the stronger of the two brothers, vows to keep his weaker younger brother Jin-Seok safe from any danger. After a military official promises to send Jin-Seok home if Jin-Tae wins a medal of honor, Jin-Tae begins to fight without fear …