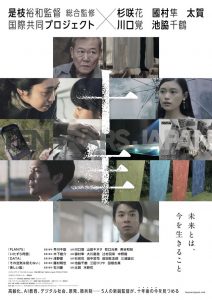 To solve the problem of an aging population, the Japanese government implements the national system “PLAN75.” Public officer Itami’s job is to recommend old people who are sick and poor for death. Meanwhile, his wife Saki is about to give birth. Saki has a hard time dealing dealing with her mother who has Alzheimer’s.

An elementary school in a country village has been designated as a special IT zone by the government. The kids attending the school live and act under A.I. system “Promise.” One day, an old horse has been selected to be slaughtered. Classmates, Ryota, Mayu and Daisuke plan a prank.

Maika is a high school student. She receives data or “digital heritage” of her late mother. Based on her mother’s data, Maika is happy to learn more about her, but she discovers a hidden side of her mother.

Japan forces its residents to move underground because of air pollution. For 10 years, Mizuki has lived in an underground city. She does not know anything about life aboveground. One day, her friend Kaede suddenly disappears from the underground city. Mizuki discovers something that Kaede left behind. Mizuki then dreams about the aboveground world.

Japan requires mandatory enlistment for the Self-Defense Forces. Watanabe works at an advertising agency. He designs a poster for the Ministry of Defense. The poster is about the country’s compulsory military program.

For Out Beautiful Country (Utsukushii Kuni)