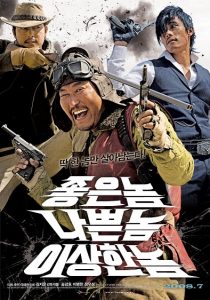 In the 1930s, the world is in chaos. In Northeast Asia, the Korean Peninsula has fallen into the hands of the Japanese Imperialists. Many Koreans have flocked to Manchuria, the vast terrain of horses and wilderness bordering their homeland and China. Some of them, inevitably, have turned into mounted bandits to earn their living in this barren wasteland.

Tae-Gu (Song Kang-Ho) is a thief. He robs a train of Japanese military officers, but the incident is not as simple as it first seems. In the middle of this fierce gun battle against the Japanese, he obtains a mysterious map that leads to a treasure from the Qing Dynasty, buried somewhere in Manchuria.

Yet, the map is also sought by Chang-Yi (Lee Byung-Hun), the cold blooded hitman. Tae-Gu must fight not only the Japanese but also Chang-Yi and his fellow thugs, who happen to attack the train at the same time. At the end of this intense gunfight, a mysterious man jumps into the center of the battle from nowhere and rescues Tae-gu with astonishing gunplay. Having survived the battle, Tae-Gu thanks the man for saving his life. Yet, he does not know that this stranger is Do-Won (Jung Woo-Sung), the bounty hunter, who has been chasing Tae-Gu to turn him in for a reward. These three men – Do-Won (The Good), Chang-Yi (The Bad) and Tae-Gu (The Weird) – will soon discover that the map they are battling for is also a magnet that attracts others as diverse as the Korean resistance, Chinese/Russian/Korean mountain bandits and the Japanese army. The blazing gun battle in the train proves to be merely the beginning of the rollercoaster ride to the final showdown to come. 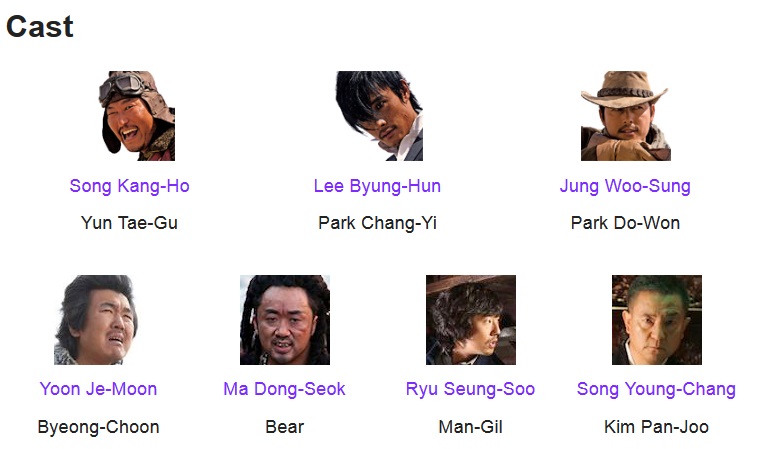