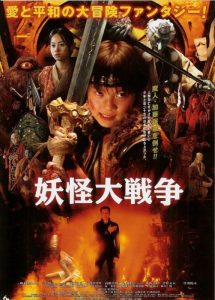 Yokai are major figures of Japanese folklore, spirits that occupy virtually everything in the world around us. Some, such as the turtle-like Kappa, are relatively well known, but there are hundreds of others, maybe even thousands. They are the spiritual element of everything in the world around us, and as such they deserve to be treated with respect. But humanity isn’t much good at respect. We consume, destroy, wear out and discard with no thought to anything but ourselves, a situation very distressing to the yokai, so distressing that the villainous Kato – accompanied by his deadly assistant Agi, played by Battle Royale and Kill Bill’s Chiaki Kuriyama – has concocted an extreme response. Kato is gathering up yokai of all sorts, preying upon the harmless and the weak, and forcibly fusing them with discarded metallic junk to create vicious killing machines that he plans to unleash on humanity. And who must stop Kato’s evil plot? Young Tadashi, a pre-teen boy gone to live in the country following his parents’ divorce. Tadashi is crowned the Kirin Rider at a local festival, a title everyone assumes is honourary until it turns out no, it falls to Tadashi to travel to find the Great Goblin and retrieve the magical sword that is the only hope of defeating Kato.