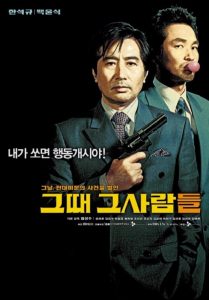 South Korean President Park Chunghee came to power via military coup in 1961 and ruled for 18 years with near dictatorial powers. In October, 1979, students and civilians called for democracy and protested Park’s oppressive rule, but Park’s military easily crushed the protesters.

On October 26, 1979, the day will go down in South Korean history as the President’s Last Bang. While the President, his chief bodyguard and Chief Secretary have dinner with two female escorts, the director of the Korean Central Intelligence Agency will attempt to assassinate the President. Director Kim of the KCIA, along with his two tops aides will now try to change history by ending the life of this charismatic political leader. (AsianWiki)