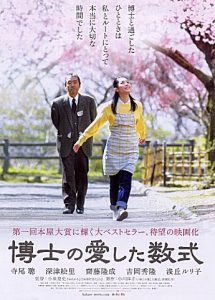 On the first day of class a young teacher enters an unruly room and begins his first lecture. To gain the students’ attention he relates the story of what probably led him into a life of mathematics. Told via flashbacks, the young teacher goes back to a time, probably 20 years earlier, when his mother was hired to look after a professor who suffered brain damage in an auto accident. The brain damage didn’t harm the personality of the man but limited his short- term memory to 80 minutes. The accident occurred 10 years earlier, in about 1975, up to that point the professor has a clear memory of events.