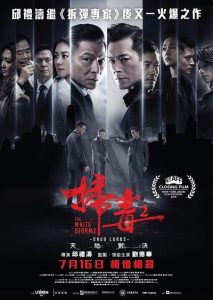 There is an iron rule in the Ching Hing Gang: No drug dealing. The gang leader, Yu Nam, has two right-hand men: one is Tin, a bright and sober adherent of principles and loyalty; the other is Ji Zo, a cold-blooded smart man who secretly runs a drug business without Nam’s knowledge. Ordered by the top leader, Tin taught Ji Zo a lesson by cutting off one of his fingers and expelled him from the gang. On the same night, policeman Fung’s wife was killed in Ji Zo’s nightclub during an operation. Meanwhile, Tin swore to change sides after his beloved girlfriend walked out of his life. 15 years later, the local drug market is now quadripartite. Ji Zo becomes the biggest drug dealer in Hong Kong; while Tin has now established himself as a financial tycoon and a philanthropist, and is offering a $100 million bounty to eliminate the No.1 drug dealer in Hong Kong. It causes a stir in both the society and the underworld. Inevitably, a battle between the two tycoons is underway.