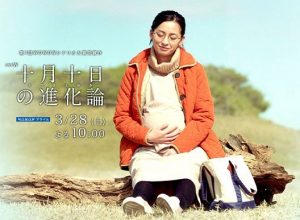 Kobayashi Suzu, who lives alone in Tokyo, has a doctorate in insect taxonomy. Insects are the great love of her life. One day, she is suddenly laid off by the university she has been working for because of her narrow field of research and obstinate personality. That night, Suzu is reunited with a former boyfriend, Ando Takeshi, at the cafe that her biological father, Nakamura Tamotsu, runs. She and her father are not in the same family register for some reason. Suzu gets dead drunk and Takeshi sends her home. The two of them end up spending the night together. About five weeks later, Suzu discovers she is pregnant. Learning from a book about the legend that a human being will replicate some 300 million years of biological evolution during the nine months as a fetus, makes Suzu determined to give birth to her child. However, she is not able to broach the topic to Takeshi. The job she has finally secured does not work out as she thought too. While she sulks in disgruntlement for successive days, her mother Fumiko comes to Tokyo from their hometown. Suzu’s pregnancy is exposed and she is berated. However, her desire to raise the child on her own does not change despite her mother’s vehement opposition. Her hidden past has something to do with her stubbornness.