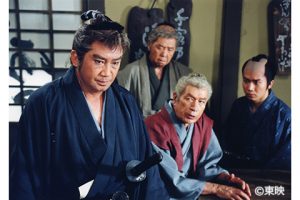 Synopsis
After spending 20 years searching for the object of his vengeance, Sekiya Kanbei discovers he is now a ronin. Inui Sanshiro was the head of a clan until his son succeeded him, or so he says. Genmu claims to have once been a ninja. These three elderly men join forces to travel the Japanese countryside together. Along the way, they encounter situations that bring out the “warrior” in each of them, and soon they are fighting the corruption and injustices that plague the common people.