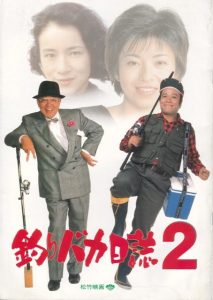 Hama-chan takes more paid holidays than anyone else at work, but is friends with the company’s president, whom he calls Su-san. Su-san’s doctor, concerned for the president’s health, suggests that he retire. Su-san becomes depressed, goes fishing without telling anyone and collapses on the beach. Hama-chan goes searching for him in Kagoshima and discovers him being nursed back to health by a much younger woman that Su-san introduces as his daughter…