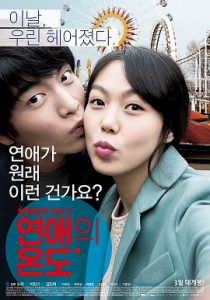 Young (Kim Min-Hee) and Dong-Hee (Lee Min-Ki) work at the same bank. They secretly dated for the past 3 years, but recently decided to end their relationship. Both tell the other that they are fine, but inside they are not. Young’s co-worker Son (Ra Mi-Ran) then tells her that she will introduce her to a good guy at dinner later that evening. At the bank worker’s dinner get-together, Dong-Hee is also there and feels jealousy. He begins to talk negatively about Young in front of her and the man she just met. Young becomes furious at Dong-Hee and pours beer all over him. A loud confrontation takes place between the former lovers and everybody at the bank now knows they dated.

Their bitter breakup turns worse when each decides to go tit for tat. Dong-Hee demands his laptop back and Young mails it back to him, but she first smashes it to several pieces. Dong-Hee responds by mailing back her belongings, including foul smelling food that is now rotten. Adding fuel to the fire, Young logs into his Facebook account and discovers that he is already seeing another girl. Can they live without each other? Can they live with each other?