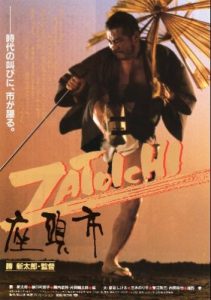 Shintaro Katsu took his final bow as Zatoichi, the nomadic blind swordsman, in this martial arts action saga from Japan. After being released from jail on charges of petty theft, Ichi finds himself caught between two rival bands of yakuza, one of whom has obtained a cache of guns from crooked policemen. Zatoichi throws in his lot with the sword-carrying gangsters, and stands at the fore as they face off for a battle to the death.