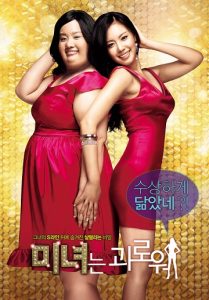 Han-Na (Kim A-Joong) is a very large girl with a warm heart. She also possesses an unbelievable voice. Han-Na wants to become a pop-singer, but due to her extra-large appearance, can only work as a faceless singer. She provides the vocals for a popular singer named Amy (Ji Seo-Yun), a beautiful young lady that can’t carry a note to save her life.

Han-Na is also in love with Amiys music producer, Sang-Joon (Joo Jin-Mo), but it’s a one-sided love. One day, Han-Na is invited to Sang-Joon’s birthday party and receives a red dress from him to wear to his party. Han-Na is excited, yet scared. The dress is revealing and quite extravagant. With her very large figure, she is not sure if she can wear such an outfit. Han-Na does eventually go to the birthday party in the red dress, but is mortified when petite Amy appears in the same red dress. During the course of the birthday party, Han-Na absorbs more emotional trauma and she simply disappears for one year.

Han-Na then returns as the beautiful Jenny …