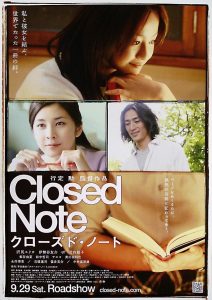 Kae Horii (Erika Sawajiri) moves into her new flat in an undisclosed area of Kyoto. While unpacking her belongings, she discovers a hidden compartment behind a inconspicuous mirror. In that compartment, Kae finds a notebook, that turns out to be a diary belonging to the previous tenant. Later that evening Kae starts to read the diary.

The writer of the diary is Ibuki Mano (Yuko Takeuchi), a young lady about to embark on her first year as an elementary school teacher. Ibuki is also in love with a man named Takashi, who may or may not hold similar feelings for Ibuki.

The diary immediately resonates with Kae, as she plans to become an elementary school teacher herself. Ibuki’s experiences also works as an inspirational instructional guide for Kae’s own personal life. Kae is also in love with an aloof illustrator/artist (Yusuke Iseya), who may or may not hold similar feelings for Kae.