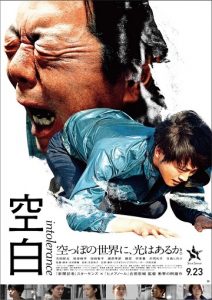 Naoto Aoyagi (Tori Matsuzaka) runs a supermarket. One day, he sees a middle school student stealing cosmetics at his store. The middle school student runs from the supermarket, but she gets hits by a car and truck. She dies from the accident. The girl’s father, Mitsuru Soeda (Arata Furuta), does not believe the accusation that his daughter was stealing from the store. He begins to place people involved in his daughter’s death, including Naoto Aoyagi and the car driver, into a corner. Meanwhile, Naoto Aoyagi and the female car driver become confused by Mitsuru Soeda’s pressure and the intense media coverage.