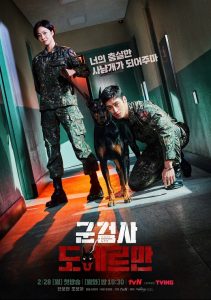 Cha Woo-In (Jo Bo-Ah) comes from a wealthy chaebol family and she works as rookie military prosecutor. She is confident and does not fear powerful people. She has excellent investigation skills for someone her age. Cha Woo-In also became a military prosecutor to seek revenge.

Do Bae-Man & Cha Woo-In begin to work together as they break down evils in the military. During this time, Do Bae-Man grows into a real military prosecutor.