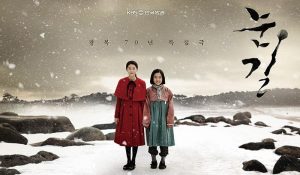 Jong-Boon (Kim Hyang-Gi) and Young-Ae (Kim Sae-Ron) live in the same Korean village, but they come from totally different backgrounds. Jong-Boon’s family is poor, but she is a bright and brave girl. Young-Ae’s family is wealthy and she is smart.

One night, Jong-Boon is kidnapped and thrown onto a train. She sees Young-Ae on the same train. Young-Ae volunteered to join a student work group, but she was deceived. She believed if she joined the student work group, she would go to Japan to study. Jong-Boon and Young-Ae are now on the same train, but they don’t know where they are headed. Soon, they face the horrific reality of “comfort women.”