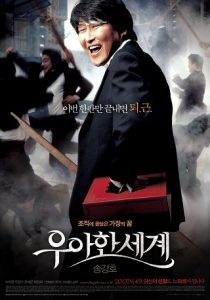 Kang In-Goo (Song Kang-Ho) is a mid-level member of a Korean criminal organization. With middle age creeping up on him, Kang In-Goo worries about his family. His wife (Park Ji-Young) is more restless about his job and his daughter (Kim So-Eun) grows more distant everyday. Kang In-Goo plans to quit the mob and buy a large suburban home for his wife. Kang In-Goo needs to do one last big score to retire. Meanwhile, Kang In-Goo’s boss (Choi Il-Hwa) favors him over his own son (Yoon Je-Moon), which causes the son to lash out against Kang In-Goo.