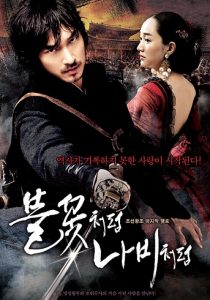 Mu Myeong (Cho Seung-Woo) is a Joseon dynasty headhunter who meets and falls in love with lady Ja Yeong (Soo-Ae) who will become the future Empress Myseongseong. A few years later, Ja Yeong enters the royal palace to marry King Gojong. Mu Myeong still having feelings for Ja Yeong and in an attempt to get closer to her becomes her personal body guard.

Ja Yeong, now as the Queen of Joseon, becomes involved in a power struggle with Russia and Japan who are attempting to colonize Korea. Furthermore, King Gojong’s father (Cheon Ho-Jin), who wields true power in Joseon, works with the foreign interests which causes Ja Yeong to stand up to him and the foreign diplomats. The king’s father then gives his implicit approval for the Japanese to assassinate Queen Je Yeong. Mu Myeong must now fend off these threats to protect the woman he loves …