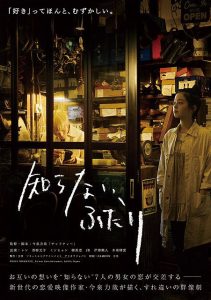 Reon (Ren) is a young Korean man. He avoids contact with other people and works as an apprentice shoemaker. One after, he sees a woman Sona (Hanae Kan) passed out and sleeping on a bench in the park. Reon doesn’t know why, but he can’t get her out of his mind. Meanwhile, Kokaze (Fumiko Aoyagi) works in the same shoe shop with Reon and has feelings for him.