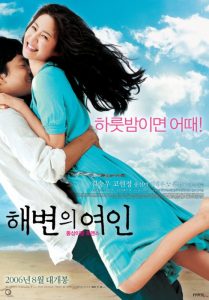 Jung-Rae (Kim Seung-Woo) is a director/writer that needs to get away from the city environment to concentrate on his script. He asks his friend and coworker to drive him down to the coastal city of Shinduri. Unfortunately, his friend, Chang-Wook (Kim Tae-Woo), already has plans for the evening…which includes a special date with a girl. The director, Jung-Rae, insists anyways and finally Chang-Wook agrees…if he can bring his girlfriend, Moon-Sook (Ko Hyun-Jung). Jung-Rae says that is fine and they agree to go all together.

Later that day when the director is picked up by Chang-Wook, he is introduced to his girlfriend, who happens to be a big fan of his work. Once they arrive in Shinduri the director and Moon-Sook become better acquainted and quickly become more attracted to each other. Moon-Sook tries to clarify to the director that she is only friends with Chang-Wook, while the director clarifies the situation even more by asking her “Who would you prefer to be with?” When Moon-Sook answers that it would be the director, they soon find themselves sneaking out together at night and end up sleeping together at another hotel.

The next day the director seems more uptight and makes it known that he is going back to Seoul because the beach town is too empty. He tells Moon-Sook that he needs some time to clear things out in his mind. The director soon returns back to Shinduri and calls Moon-Sook repeatedly on her cellphone. Even though she doesn’t answer the phone, Jung-Rae leaves a message asking her to come back to Shinduri to see him. Soon after the phone call, the director comes across another lady near the beach that he believes resembles Moon-Sook. While they become more involved, Moon-Sook has now returned to Shinduri.